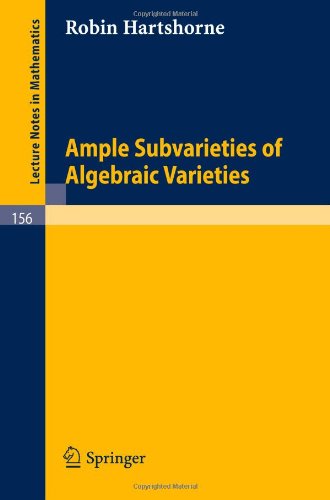 Description:
These notes are an enlarged version of a three-month course of lectures I gave at the Tata Institute of Fundamental Research. Their style is informal. I hope they will serve as an introduction to some current research topics, for students who have had a one year course in modern algebraic geometry.

Introduction to Algebraic Geometry
by Sudhir R. Ghorpade - Indian Institute of Technology Bombay
This text is a brief introduction to algebraic geometry. We will focus mainly on two basic results in algebraic geometry, known as Bezout's Theorem and Hilbert's Nullstellensatz, as generalizations of the Fundamental Theorem of Algebra.
(8635 views)

Computations in Algebraic Geometry with Macaulay 2
by D. Eisenbud, D. Grayson, M. Stillman, B. Sturmfels - Springer
This book presents algorithmic tools for algebraic geometry and experimental applications of them. It also introduces a software system in which the tools have been implemented and with which the experiments can be carried out.
(10640 views)

Algebraic Curves: an Introduction to Algebraic Geometry
by William Fulton - Benjamin
These notes develop the theory of algebraic curves from the viewpoint of modern algebraic geometry, but without excessive prerequisites. It assumed that the reader is familiar with some basic properties of rings, ideals, and polynomials.
(14155 views)