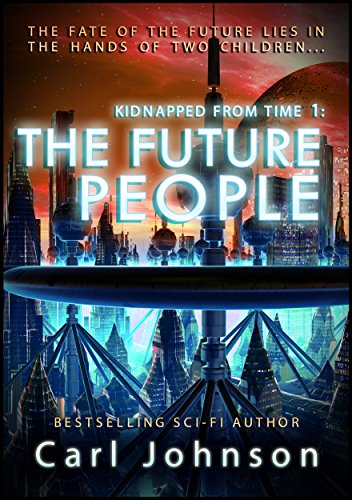 The Future People
by Carl Johnson

Description:
Kenneth and Savannah are classmates, regular teenagers, who are whisked away 50 centuries into the future to save over one hundred trillion lives and prevent the destruction of the human race. Only then will they be allowed to return home. And they better hurry, for time is running out ...

Project Mastodon
by Clifford D. Simak
Hudson lay in his sleeping bag, staring at the sky. There was not one familiar constellation, not one star that he could name. This juggling of the stars emphasized more than anything else the vast gulf of years which lay between him and the Earth.
(3012 views)

The Time Machine
by H. G. Wells - Project Gutenberg
The novel is considered one of the earliest works of science fiction and the progenitor of the 'time travel' subgenre. Wells advanced his social and political ideas in this narrative of a nameless Time Traveller who is hurtled into the year 802,701.
(13993 views)

Virtual Evil
by Jana G. Oliver - Dragon Moon Press
Jacynda's latest assignment is a double-edged sword: find the greatest of all Time Rovers and send him to 2057. If she returns Harter Defoe to the future, she ll be branded a traitor to her kind. If she fails, the punishment is a decade in prison.
(12753 views)

A Connecticut Yankee in King Arthur's Court
by Mark Twain - Charles L. Webster & Co.
Satirical novel by Mark Twain, the tale of a commonsensical Yankee who is carried back in time to Britain in the Dark Ages, and it celebrates homespun ingenuity and democratic values in contrast to the superstitious ineptitude of a feudal monarchy.
(8391 views)