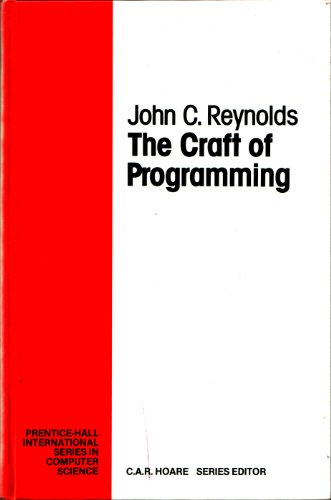 The Craft of Programming
by John C. Reynolds

Description:
The modern computer is so powerful that a casual knowledge of programming suffices for most of its users. However, a variety of circumstances can abruptly require a much deeper understanding: the need to structure a program carefully to avoid being overwhelmed by its complexity, the need to insure reliability beyond what can he achieved by debugging, or the need to utilize computing resources efficiently. Beyond such practical considerations, there is an inherent intellectual satisfaction in mastering the fundamental concepts of programming. The aim of this book is to provide such mastery concept by concept. For example, the reader is expected to understand proofs of correctness and order-of-magnitude time requirements for simple integer algorithms - such as log n exponentiation - before the concept of arrays is introduced. A similarly thorough understanding of array manipulating algorithms is expected before the introduction of procedures.

The Little Introduction To Programming
by Karl Seguin - codingintro.com
This book will teach you the fundamentals of programming and act as a foundation for whatever your programming goals may be. Rather than ignore complexities, we will face them head-on, in small steps, and unshroud the mysteries of computer language.
(11771 views)

Computer Science: Abstraction to Implementation
by Robert M. Keller - Harvey Mudd College
This book is intended for a second course in computer science, one emphasizing principles wherever it seems possible. It is not limited to programming, it attempts to use various programming models to explicate principles of computational systems.
(19777 views)