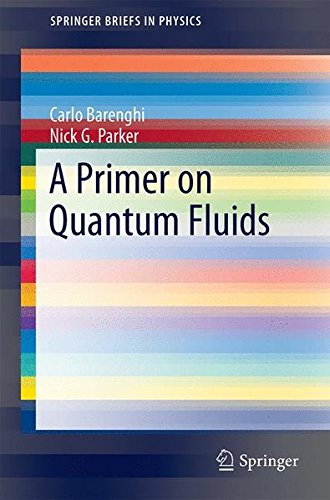 Description:
This book introduces the theoretical description and properties of quantum fluids. The focus is on gaseous atomic Bose-Einstein condensates and, to a minor extent, superfluid helium, but the underlying concepts are relevant to other forms of quantum fluids such as polariton and photonic condensates. The book is pitched at the level of advanced undergraduates and early postgraduate students.

Quantum Theory of Condensed Matter
by John Chalker - Oxford University
I aim to discuss a reasonably wide range of quantum-mechanical phenomena from condensed matter physics, with an emphasis mainly on physical ideas. The most important prerequisite is some understanding of second quantization for fermions and bosons.
(5321 views)

Physics of Soft Matter
by Primoz Ziherl - University of Ljubljana
These notes were prepared for the one-semester course in theoretical physics of soft condensed matter physics for master students. The aim of the course is to provide a broad review the phenomena and the concepts characteristic of soft matter.
(1610 views)

The ABC of Density Functional Theory
by Kieron Burke, et al. - University of California, Irvine
DFT is not just another way of solving the Schroedinger equation. Density functional theory is a completely different, rigorous way of approaching any interacting problem, by mapping it exactly to a much easier-to-solve non-interacting problem.
(4488 views)

Response Theory of the Electron-Phonon Coupling
by R. Starke, G. A. H. Schober - arXiv
Systematic theoretical enquiry concerning the conceptual foundations and the nature of phonon-mediated electron-electron interactions. We propose a simple scheme to decouple the electrons and nuclei of a crystalline solid via effective interactions.
(2743 views)