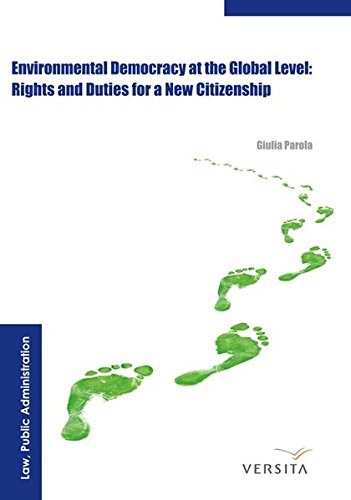 Environmental Democracy at the Global Level
by Giulia Parola

Description:
A manifesto that is both traditional and revolutionary at the same time. It calls for the construction of a new civilisation centred on the environment, while drawing on the traditional notions of democratic government. It adopts an approach that is focused on the power of individuals rather than governments.

Nuremberg: The Last Battle
by David Irving - Focal Point Publications
This book is an intimate look at the origins and conduct of the first post-war trial of major war criminals held at Nuremberg from 1945 to 1946. It has as its nucleus a series of articles which the author wrote in the late 1960s.
(14600 views)

Conducting Transatlantic Business: Basic Legal Distinctions in the US and Europe
by August G. Minke - BookBoon
The perception of Europeans and Americans about each other's laws is often wrong, yet people are so convinced that they have heard it right, that smaller and even medium sized businesses make important decisions based on wrong assumptions.
(13898 views)

Immigration Policy and the Terrorist Threat in Canada and United States
by James Bissett, at al. - The Fraser Institute
The authors identify serious weaknesses in the immigration, asylum, and border regimes from Canadian and American perspectives. The entry of a number of potentially dangerous individuals should warrant major attention and policy review.
(13995 views)

Fresh Perspectives on the 'War on Terror'
by Miriam Gani, Penelope Mathew - ANU E Press
This book engages critically with the metaphor of war in the context of terrorism. The authors write about terrorism from the perspective of international law, public and constitutional law, criminal law and criminology, and legal theory.
(13567 views)