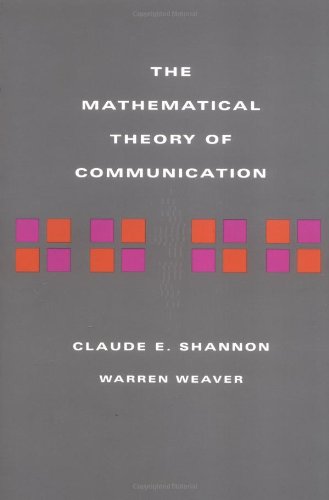 A Mathematical Theory of Communication
by Claude Shannon

Description:
The person who wrote this paper is the father of modern communication theory, Claude Shannon. In this seminal work Shannon presents results that were previously found nowhere else, and today many professors refer to it as the best exposition still on the subject of the mathematical limits on communication (such as bandwidth). Further, it laid the modern foundations for what is now coined Information Theory. Classic work.

Network Coding Theory
by Raymond Yeung, S-Y Li, N Cai - Now Publishers Inc
A tutorial on the basics of the theory of network coding. It presents network coding for the transmission from a single source node, and deals with the problem under the more general circumstances when there are multiple source nodes.
(13066 views)

From Classical to Quantum Shannon Theory
by Mark M. Wilde - arXiv
The aim of this book is to develop 'from the ground up' many of the major developments in quantum Shannon theory. We study quantum mechanics for quantum information theory, we give important unit protocols of teleportation, super-dense coding, etc.
(6765 views)

Essential Coding Theory
by Venkatesan Guruswami, Atri Rudra, Madhu Sudan - University at Buffalo
Error-correcting codes are clever ways of representing data so that one can recover the original information even if parts of it are corrupted. The basic idea is to introduce redundancy so that the original information can be recovered ...
(4845 views)

A Short Course in Information Theory
by David J. C. MacKay - University of Cambridge
This text discusses the theorems of Claude Shannon, starting from the source coding theorem, and culminating in the noisy channel coding theorem. Along the way we will study simple examples of codes for data compression and error correction.
(9475 views)