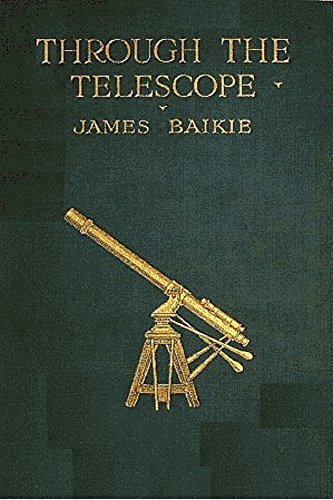 Through the Telescope
by James Baikie

Description:
The main object of the following chapters is to give a brief and simple description of the most important and interesting facts concerning the heavenly bodies, and to suggest to the general reader how much of the ground thus covered lies open to his personal survey on very easy conditions.

Star-Gazer's Hand-Book
by Henry William Elson - Sturgis & Walton
In the first part the author gives the main astronomical facts according to the latest discoveries [1910], but makes no pretense of entering into higher mathematical Astronomy. The second part of the book treats the Constellations.
(11793 views)

Observing the Sky from 30S
by Roberto Mura - Wikibooks
This atlas contains a set of 24 maps regulated to the latitude of 30S, similar to those of many important cities in the southern hemisphere, such as Sydney, as well as information about some double and variable stars and almost 160 deep sky objects.
(9153 views)

Observing the Sky from 40N
by Roberto Mura - Wikibooks
This atlas contains a set of 24 maps regulated to the latitude of 40N, as well as information about some double and variable stars and almost 160 deep sky objects. 8 selected areas of the sky suitable for binoculars are displayed in separated maps.
(6522 views)

Mag 7 Star Atlas Project
by Andrew L. Johnson
Star Atlas plotting stars down to Magnitude 7.25, including double-stars and 550 DSOs. This is a full color version including different symbols for DSOs, and a representation of the Milky Way. There are 20 primary charts, and one supplemental chart.
(9694 views)