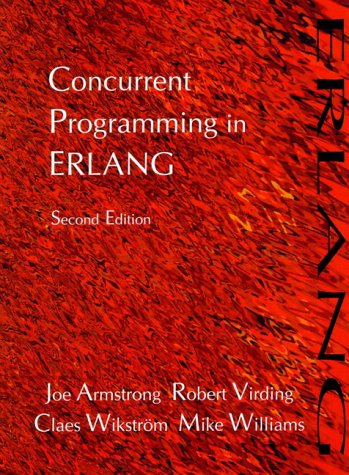 Description:
Erlang is a concurrent, functional programming language designed for programming large industrial real time systems. The language is untyped and has a pattern matching syntax. Functions are written as a set of recursion equations and the language has explicit concurrency and asynchronous message passing. Erlang provides explicit concurrency, has asynchronous message passing and is relatively free from side effects. Written in a tutorial style, the emphasis of this book is on learning through example and a number of well known problems in designing and programming concurrent fault-tolerant real-time systems are illustrated.

Parallel Programming with Microsoft .NET
by Colin Campbell, Ralph Johnson, Stephen Toub - Microsoft Press
A book that introduces .NET programmers to patterns for including parallelism in their applications. Examples of these patterns are parallel loops, parallel tasks and data aggregation with map-reduce. Each pattern has its own chapter.
(12874 views)

A Framework for Enabling Distributed Applications on the Internet
by Mark Anthony McLaughlin - arXiv
Internet distributed applications (IDAs) are internet applications with which many users interact simultaneously. In this paper the author provides a basis for a framework that combines IDAs collectively within a single context.
(7722 views)

Introduction to Parallel Computing
by Blaise Barney - Lawrence Livermore National Laboratory
This tutorial covers the very basics of parallel computing, and is intended for someone who is just becoming acquainted with the subject. It begins with a brief overview, including concepts and terminology associated with parallel computing.
(11380 views)