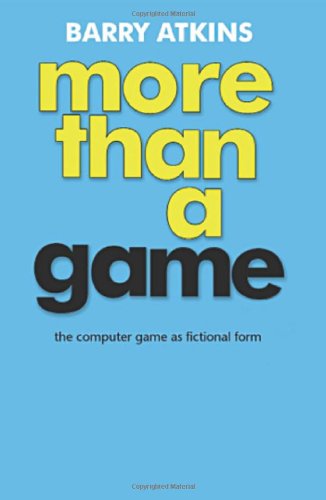 More than a Game: The Computer Game as Fictional Form
by Barry Atkins

Description:
This book considers the computer game as a new and emerging mode of contemporary storytelling. In a carefully organized study, Barry Atkins discusses questions of narrative and realism in four of the most significant games of the last decade: Tomb Raider, Half-Life, Close Combat and SimCity. This is a work for both the student of contemporary culture and those game-players who are interested in how computer games tell their stories.

Play Redux: The Form of Computer Games
by David Myers - University of Michigan Press
A critical analysis of the aesthetic pleasures of video game play, drawing on early twentieth-century formalist theory and models of literature. Play Redux will generate interest among scholars of communications, new media, and film.
(6629 views)

Beyond Fun: Serious Games and Media
by Drew Davidson et al. - Lulu.com
This book focuses on strategies for applying games, simulations and interactive experiences in learning contexts. Throughout, the promises and problems of implementing games and media in learning experiences are explored.
(7335 views)

Silent Hill: The Terror Engine
by Bernard Perron - University of Michigan Press
Silent Hill, with its first title released in 1999, is one of the most influential of the horror video game series. This book is both a close analysis of the first three Silent Hill games and a general look at the whole series.
(6208 views)

Myst and Riven: The World of the D'ni
by Mark J. P. Wolf - University of Michigan Press
This book is a close analysis of two of the most popular and significant video games in the history of the genre, investigating in detail their design, their functionality, and the gameplay experience they provide players.
(7824 views)