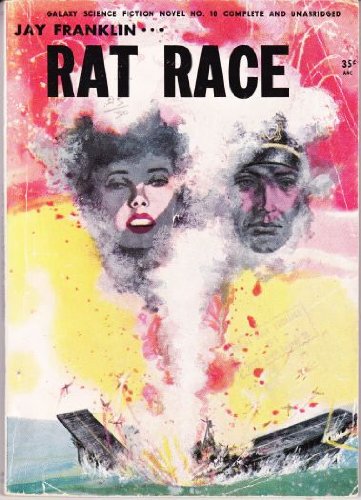 The Rat Race
by Jay Franklin

Description:
The novel concerns Lieutenant Commander Frank Jacklin who is blown up in a thorium bomb explosion while on the battleship Alaska. He awakens in the body of Winnie Tompkins who had perpetrated the explosion. As Tompkins, he learns of a plot by German agents to poison Franklin D. Roosevelt and he tries to warn the authorities. He continues to become involved in intrigue until another accident restores Tompkins to his body, leaving Jacklin in the body of a dog.

Shambleau
by C. L. Moore - The Galaxy Publishing Corporation
One of the strangest, and surely one of the most imaginative stories ever written, C.L. Moore's first novel 'Shambleau' was hailed by readers, authors, and editors as the debut of a truly gifted writer during the golden age of science fiction.
(2678 views)

Prelude to Space
by Arthur C. Clarke - The Galaxy Publishing Corporation
The world's first lunar spacecraft is about to launch. The ship is built from two separate components -- one designed to travel from Earth's atmosphere to the Moon and back, and the other to carry the first component through Earth's atmosphere.
(2277 views)