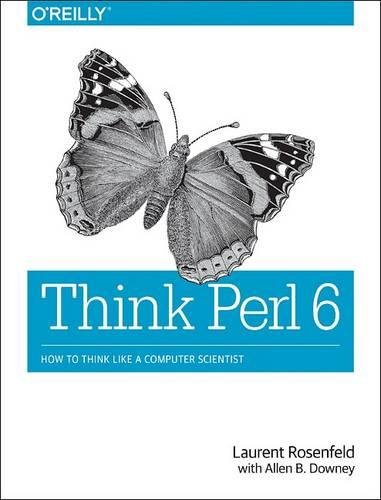 Think Perl 6: How to Think Like a Computer Scientist
by Allen B. Downey

Description:
Think Perl 6 is an introduction to computer science and programming intended for people with little or no experience. After having completed this book, you should hopefully be able to write programs to solve relatively difficult problems in Perl 6, but my main aim is to teach computer science, software programming, and problem solving rather than solely to teach the Perl 6 language itself.

Modern Perl
by chromatic - Onyx Neon Press
Modern Perl is one way to describe how experienced and effective Perl 5 programmers work. They use language idioms. They take advantage of the CPAN. They're recognizably Perlish, and they show good craftsmanship and a full understanding of Perl.
(9927 views)

Perl 6 Programming
- Wikibooks
Perl 6 is the sixth edition of the Perl programming language, representing a major backwards-incompatible rewrite of the language. This online book is going to introduce the reader to the Perl 6 language and its many features.
(11992 views)

Higher-Order Perl: Transforming Programs with Programs
by Mark Jason Dominus - Morgan Kaufmann
Perl incorporates many advanced features that are not well understood and are rarely used by most Perl programmers, but they are very powerful. One of these techniques is writing functions that manufacture or modify other functions.
(16973 views)

Perl 5 Internals
by Simon Cozens - NetThink
A three-hour course which provides a hands-on introduction to how the perl interpreter works internally, how to go about testing and fixing bugs in the interpreter, and what the internals are likely to look like in the future of Perl, Perl 6.
(10345 views)