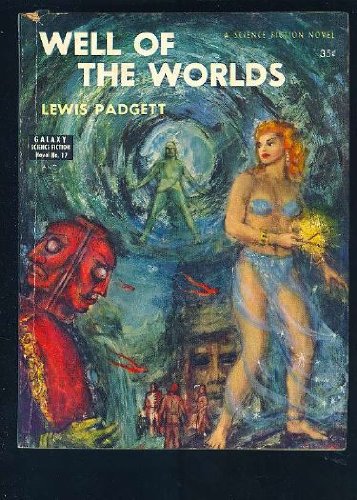 Well of the Worlds
by Lewis Padgett

Description:
Clifford Sawyer, investigating ghosts in a mine, finds ancient beings from another world -- and gets swept up in a titanic struggle between for control of a parallel dimension. This novel was originally published in 'Startling Stories', in 1952.

The Black Galaxy
by Murray Leinster - Gerard Arthus
Rod wanted to have the first real spaceship capable of putting up a fight. He believed it might need to fight. But anyhow he was still in command of the construction of the space-ship now building and he'd command it when it took off from Earth ...
(3582 views)

Pebble in the Sky
by Isaac Asimov - The Galaxy Publishing Corporation
One moment Joseph Schwartz is a happily retired tailor in Chicago, 1949. The next he's a helpless stranger on Earth during the heyday of the first Galactic Empire. Earth, as he soon learns, is a backwater, just a pebble in the sky, despised by all...
(2640 views)