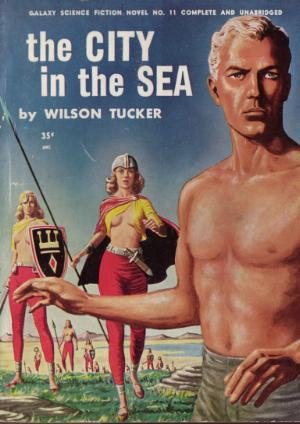 The City in the Sea
by Wilson Tucker

Description:
This is the story of an expedition -- a strange and exciting expedition of one man and an army of women. He had come into the land of the women suddenly -- and without warning. Tall, bronzed, muscular, he stood out among their pale skins and meek spirits.

Virgin Planet
by Poul Anderson - The Galaxy Publishing Corporation
He is Davis Bertram, a space-explorer. But how can he convince them he really is a man? Their legends have built Men into gods. Trying to be worthy of the Coming, the women imitate masculine virtues. They are warlike, ambitious, ruthless.
(2670 views)

Three Go Back
by J. Leslie Mitchell - The Galaxy Publishing Corporation
When their transatlantic airship is destroyed, three survivors find themselves in a lost world 25,000 years in the past, a world peopled by Neanderthals and Cro-Magnons. Claire Stranlay must somehow survive and does so in the only way she knows how.
(3086 views)