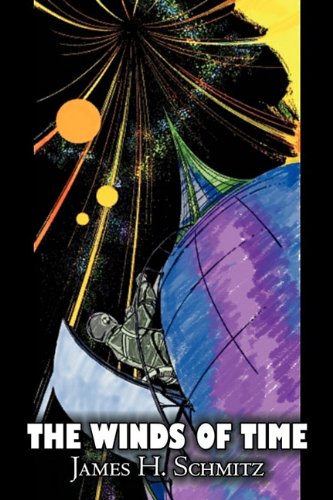 The Winds of Time
by James H. Schmitz

Description:
Star ships, aliens from the future, time travel, romance, cannibalism, pet humans and mute-but-brilliant aliens ... and, of course, it's got a hero who solves every problem by being smarter and trickier and better-prepared than we'd ever imagine being.

Time Out of Joint
by Richard L. Foland, Jr - Smashwords
A mysterious Immortal is jumping through time. He's harvesting heads and causing incalculable damage to the web of time. Trapped on their homeworld the Time Lords are powerless to intervene. In desperation, they disregard the first law of time...
(4257 views)

Time Crime
by H. Beam Piper - ManyBooks
A police procedural story, set in the world of the future. Human society has developed the technology to move laterally between parallel universes. The heroes of this story, Verken Vall and his wife, are ready to embark on a long-overdue vacation...
(3943 views)

The Future People
by Carl Johnson - Smashwords
Kenneth and Savannah are classmates, regular teenagers, who are whisked away 50 centuries into the future to save over one hundred trillion lives and prevent the destruction of the human race. Only then will they be allowed to return home ...
(2929 views)

Project Mastodon
by Clifford D. Simak
Hudson lay in his sleeping bag, staring at the sky. There was not one familiar constellation, not one star that he could name. This juggling of the stars emphasized more than anything else the vast gulf of years which lay between him and the Earth.
(1659 views)