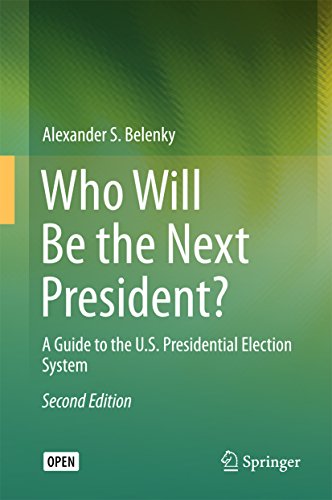 Who Will Be the Next President?
by Alexander S. Belenky

Description:
This book addresses the peculiarities of the current presidential election system not yet addressed in other publications. It argues that any rules for electing a President that may have a chance to replace the current ones should provide an equal representation of states as equal members of the Union, and of the nation as a whole.

Data Analysis for Politics and Policy
by Edward R. Tufte - Prentice Hall
A great book for the beginning data analyst and a must for political science graduate students. It is a clear introduction to the use of regression analysis. Edward Tufte was a political scientist of the first order and a teacher par excellence.
(10079 views)

UK Constitution and Government
- Wikibooks
The perfect introduction for high school lessons on UK government. It is also a quick guide for people of other nations to get some insight into the arcane governance of the UK with its powerless head of state and all powerful House of Commons.
(14285 views)

Capitalism 3.0: A Guide to Reclaiming the Commons
by Peter Barnes - Berrett-Koehler Publishers
Barnes' idea is that we need to use a 3rd institution to develop a better form a capitalism that takes into account natural resources that are used and not accounted for. This is needed, because government has failed to do a good job in this regard.
(15170 views)