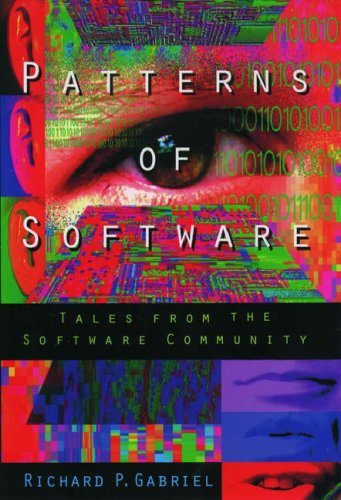 Patterns of Software: Tales from the Software Community
by Richard P. Gabriel

Description:
In Patterns of Software, the respected software pioneer and computer scientist, Richard Gabriel, gives us an informative inside look at the world of software design and computer programming and the business that surrounds them. In this wide-ranging volume, Gabriel discusses such topics as what makes a successful programming language, how the rest of the world looks at and responds to the work of computer scientists, how he first became involved in computer programming and software development, what makes a successful software business, and why his own company, Lucid, failed in 1994, ten years after its inception. Perhaps the most interesting and enlightening section of the book is Gabriel's detailed look at what he believes are the lessons that can be learned from architect Christopher Alexander, whose books--including the seminal A Pattern Language--have had a profound influence on the computer programming community. Gabriel illuminates some of Alexander's key insights--"the quality without a name," pattern languages, habitability, piecemeal growth--and reveals how these influential architectural ideas apply equally well to the construction of a computer program. Gabriel explains the concept of habitability, for example, by comparing a program to a New England farmhouse and the surrounding structures which slowly grow and are modified according to the needs and desires of the people who live and work on the farm. "Programs live and grow, and their inhabitants--the programmers--need to work with that program the way the farmer works with the homestead." Although computer scientists and software entrepreneurs will get much out of this book, the essays are accessible to everyone and will intrigue anyone curious about Silicon Valley, computer programming, or the world of high technology.

DevOps for Digital Leaders
by Aruna Ravichandran, Kieran Taylor, Peter Waterhouse - Springer
This book provides digital leaders who are accountable for the rapid development of high-quality software applications a concise guide to designing, implementing, measuring, and improving DevOps programs that are tailored to their organizations.
(3071 views)

The Twelve-Factor App
by Adam Wiggins - 12factor.net
This document synthesizes all of our experience on a wide variety of software-as-a-service apps in the wild. It is a triangulation on ideal practices for app development, paying particular attention to the dynamics of the organic growth of an app.
(4225 views)

Small Memory Software: Patterns for systems with limited memory
by Charles Weir, James Noble - Addison-Wesley
Offers state-of-the art programming solutions for personal digital assistants (PDAs). Includes illustrated patterns professionals can use, with implementation notes for reference, including some on the companion Web site, and examples in C++ or Java.
(15660 views)