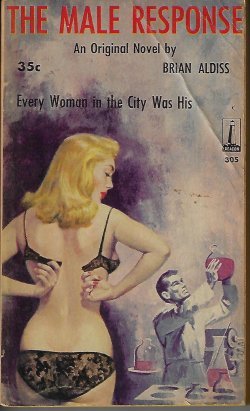 The Male Response
by Brian Aldiss

Description:
Written at the peak of the swinging sixties, this is an ironic, hilarious and frank investigation of sexual politics and the male sex drive. Brian Aldiss is a fiction and science fiction writer, poet, playwright, critic, memoirist and artist.

The Black Galaxy
by Murray Leinster - Gerard Arthus
Rod wanted to have the first real spaceship capable of putting up a fight. He believed it might need to fight. But anyhow he was still in command of the construction of the space-ship now building and he'd command it when it took off from Earth ...
(3581 views)

Prelude to Space
by Arthur C. Clarke - The Galaxy Publishing Corporation
The world's first lunar spacecraft is about to launch. The ship is built from two separate components -- one designed to travel from Earth's atmosphere to the Moon and back, and the other to carry the first component through Earth's atmosphere.
(2276 views)