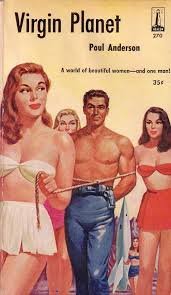 Description:
He is Davis Bertram, a space-explorer. But how can he convince them he really is a man? Their legends have built Men into gods. Trying to be worthy of the Coming, the women imitate masculine virtues. They are warlike, ambitious, ruthless. Unless Davis can convince them he is a man, they will kill him for blasphemy.

The Legion of Space
by Jack Williamson - Gerard Arthus
This is Jack Williamson's early 'space opera' science fiction tale, first serialized in Astounding Stories in 1934, and published in book form by Fantasy Press in 1947. 'Galaxy Science Fiction Novels' were published for distribution to newsstands.
(3584 views)