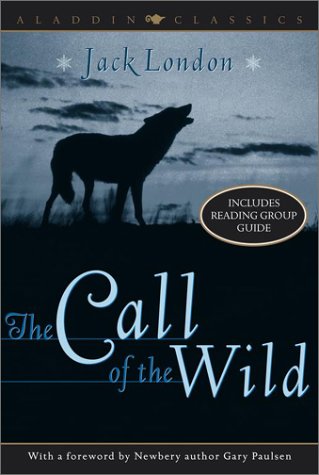 The Call of the Wild
by Jack London

Description:
First published in 1903, The Call of the Wild is regarded as Jack London's masterpiece. Based on London's experiences as a gold prospector in the Canadian wilderness and his ideas about nature and the struggle for existence, The Call of the Wild is a tale about unbreakable spirit and the fight for survival in the frozen Alaskan Klondike. It is amazing just how engrossing a book about a dog can be. Then again, this is also a tribute to the North and a time of exploration that is long gone--Jack London could have probably written this about a human, for the detail and love he gives his lead character, a furry boy called Buck. He's half St. Bernard, half Shepherd, with a mix-in of something a little more fierce that responds to his northern experience and the title of the book.

The Star Rover
by Jack London - Mills & Boon
A framing story is told in the first person by Darrell Standing, a university professor serving life imprisonment in San Quentin State Prison for murder. Prison officials try to break his spirit by means of a torture device called 'the jacket'.
(4132 views)

Hearts of Three
by Jack London - ManyBooks
Two men exactly alike in appearance, hunting for a treasure in the South sea islands, start the complication in this scenario novel written by Jack London. Graphic, clear and thrilling in style and with much of the old charm.
(6015 views)

White Fang
by Jack London - Project Gutenberg
This book is Jack London's adventure masterpiece, it is not only a vivid account of the Klondike gold rush and North American Indian life, but it is also an intriguing study of the effects different environments have on an individual.
(9189 views)

The People of the Abyss
by Jack London - Classic Reader
A book by Jack London about life in the East End of London in 1902. He wrote this first-hand account by living in the East End (including the Whitechapel District) for several months, sometimes staying in workhouses or sleeping on the streets.
(10460 views)