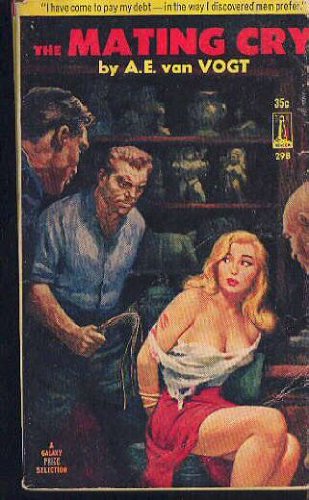 The Mating Cry
by A. E. van Vogt

Description:
The dirt of the grave made a hollow sound as it struck the wooden box inside which was his coffin. Darkness pressed like a blotter over his mind, but something inside him must have continued the desperate fight. Because, suddenly, he had the sharpest awareness of his long sleep.

Killer To Come
by Sam Merwin Jr. - The Galaxy Publishing Corporation
Dr Julius Conrad of the Wellington Institute for the Study of the Humanities has developed a radical hypothesis: Namely, that the work of most geniuses, past and present, has been directed by minds from a ruthless future ...
(2528 views)

Three Go Back
by J. Leslie Mitchell - The Galaxy Publishing Corporation
When their transatlantic airship is destroyed, three survivors find themselves in a lost world 25,000 years in the past, a world peopled by Neanderthals and Cro-Magnons. Claire Stranlay must somehow survive and does so in the only way she knows how.
(3085 views)