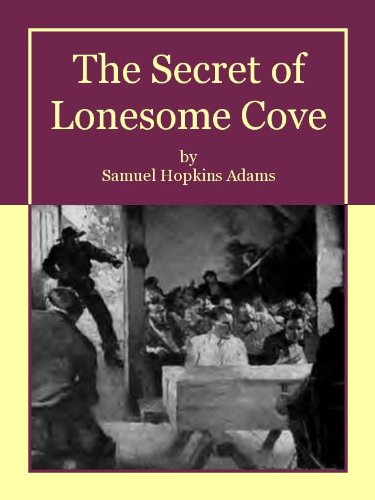 The Secret of Lonesome Cove
by Samuel Hopkins Adams

Description:
A mystery concerning a woman's corpse, which is found handcuffed to a raft on a New England beach. Lonesome Cove is one of the least frequented stretches on the New England seaboard. From the land side, the sheer hundred-foot drop of Hawkill Cliffs shuts it off. Access by water is denied; denied with a show of menacing teeth, when the sea curls its lips back, amid a swirl of angry currents, from its rocks and reefs, warning boats away.

The Mystery
by Stewart Edward White, Samuel Hopkins Adams - ManyBooks
The disappearance of three successive crews from the stout ship 'Laughing Lass' in mid-Pacific, is a mystery weird and inscrutable. In the solution, there is an exciting story of the most exciting voyage that man ever undertook.
(7928 views)

The Clarion
by Samuel Hopkins Adams - Houghton Mifflin Company
Hal Surtaine is a 25-year-old son of a quack who made a fortune selling patent medicines. Publications begin to denounce Hal's father, so Hal responds by purchasing the publication. Soon enough, though, Hal changes his perspective on the industry ...
(2118 views)

The Unspeakable Perk
by Samuel Hopkins Adams - Houghton Mifflin Company
In this charming and quirky romance, beautiful heiress Polly Brewster is willing to go to the ends of the earth to evade her annoying trio of suitors. She winds up in a tropical paradise that is being torn asunder by political conflict ...
(2293 views)