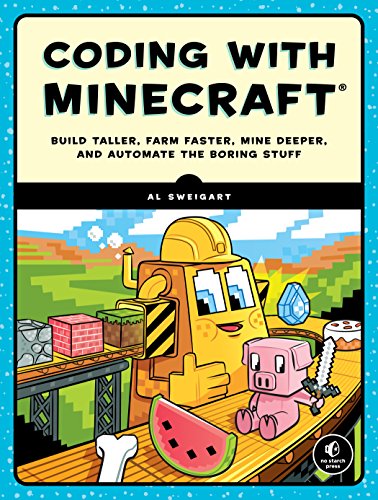 Coding with Minecraft
by Al Sweigart

Description:
In Coding with Minecraft, you'll create a virtual robot army with Lua, a programming language used by professional game developers. Step-by-step coding projects will show you how to write programs that automatically dig mines, collect materials, craft items, and build anything that you can imagine. Along the way, you'll explore key computer science concepts like data types, functions, variables, and more.

BlitzMax
- Wikibooks
BlitzMax is a computer programming language based on BASIC. The code is first converted to a low level assembler format which is then assembled into object code for the target platform. BlitzMax is capable of compiling for Windows, Linux and Mac OS.
(12129 views)

Learning to Draw Basic Graphics in C++
by Michael Morrison - InformIT
Learn how to use C++ code to create basic animated graphics in this chapter from Beginning Game Programming by Michael Morrison. Practical lesson based on C++ programming, the basics of drawing graphics using the Windows Graphics Device Interface.
(14729 views)

Adventure in Prolog
by Dennis Merritt - Springer
This book takes a pragmatic, rather than theoretical, approach to the language and is designed for programmers interested in adding this powerful language to their bag of tools. Much of the book is built around the writing of a short adventure game.
(18405 views)