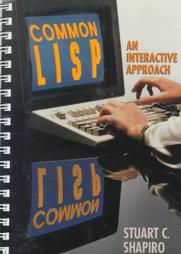 Description:
The purpose of this book is to teach the Common Lisp programming language. Because of the varied interests in Lisp, this book has tried to present it in a general and neutral setting, rather than specifically in the context of any of the special fields in which it is used. Since this book assumes that students will have had experience with some imperative programming language, it teaches pure Lisp before the imperative constructs.

Lisp in Small Parts
by David Johnson-Davies
The tutorials are aimed at someone with no previous experience of programming, and they are designed to take the reader to the stage where they can start writing their own programs to solve practical, interesting applications.
(5832 views)

Common LISP: A Gentle Introduction to Symbolic Computation
by David S. Touretzky - Benjamin-Cummings Pub Co
This is a gentle introduction to Common Lisp for students taking their first programming course. No prior mathematical background beyond arithmetic is assumed. There are lots of examples, the author avoided technical jargon.
(21748 views)