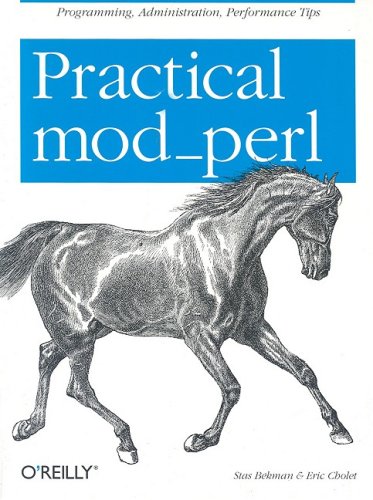 Description:
mod_perl is an Apache module that builds the power of the Perl programming language directly into the Apache web server. With mod_perl, CGI scripts run as much as 50 times faster, and you can integrate databases with the server, write Apache modules in Perl, embed Perl code directly into Apache configuration files, and even use Perl in server-side includes. This book is about building mod_perl, using it, programming with it, and optimizing it.

Impatient Perl
by Greg London - Lulu.com
This document is for people who either want to learn perl or are already programming in perl and just don't have the patience to scrounge for information. This is also a handy desk reference for some of the more common perl related questions.
(12012 views)

Using Perl 6
by Jonathan S. Duff, et al.
This book is primarily for people who want to learn Perl 6. It teaches the basics from a Perl 6 perspective, touching on variable interpolation, datastructure use, object construction, threads, closures, symbol tables, and other core features.
(12844 views)

Think Perl 6: How to Think Like a Computer Scientist
by Allen B. Downey - Green Tea Press
After having completed this book, you should be able to write programs to solve relatively difficult problems in Perl 6, but my main aim is to teach computer science, software programming, and problem solving rather than solely to teach the Perl 6.
(3954 views)

Mastering Perl
by brian d foy - O'Reilly Media
This book isn't a collection of clever tricks, but a way of thinking about Perl programming so you can integrate the real-life problems of debugging, maintenance, configuration, and other tasks you encounter as a working programmer.
(10479 views)