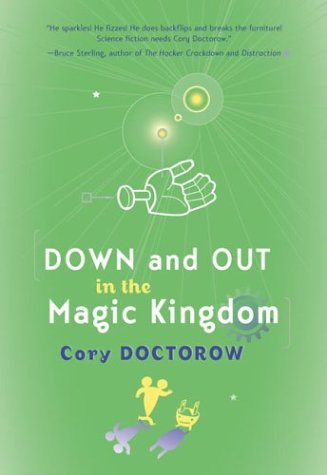 Down and Out in the Magic Kingdom
by Cory Doctorow

Description:
Jules is a young man barely a century old. He's lived long enough to see the cure for death and the end of scarcity, to learn ten languages and compose three symphonies...and to realize his boyhood dream of taking up residence in Disney World.Disney World!

Little Brother
by Cory Doctorow - Tor Teen
Marcus is a seventeen years old guy who already knows how the system works. He has no trouble outwitting his high school’s clumsy surveillance systems. But his whole world changes when he find himself caught in the aftermath of a terrorist attack.
(13133 views)

One Way To Mars
by Gary Weston - Smashwords
Andrew Foreman hadn't wanted to go to Mars in the first place. But somebody had to look after GenMoP, the genetically modified primate. Foreman had always regarded space travel as a dangerous business, but he had no idea just how dangerous.
(7684 views)

The Truth Stone
by CL Sumruld - Smashwords
Satellite research by the World Creationist Society detects a strange geological anomaly in Crab Orchard, Tennessee. A crew of zany Tennessee hillbilly rock pickers are slabbing sandstone in a quarry where even the goats start acting strange.
(8426 views)

Blind Spot
by Bascom Jones - BooksFairy.com
Our civilization predates that of Earth's by millions of years. We are an advanced, peaceful race. Yet, since Earth's first rocket landed here thirteen years ago, we have been looked upon as freaks and contemptuously called 'bug-men' behind our backs!
(9940 views)