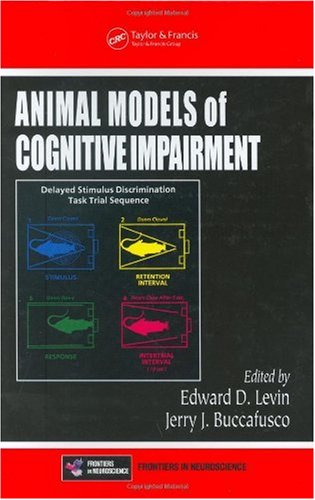 Description:
Animal Models of Cognitive Impairment examines some of the most popular and successful animal archetypes used in the context of drug discovery. It provides integrated coverage of the latest research concerning neuronal systems relevant to cognitive function and dysfunction, assimilating reviews of this research within the context of each chapter. The book comprehensively discusses a wide variety of animal models of cognitive impairment, including genetic, lesion, pharmacological, and aging related impairments. It also explores the significance of this research in regards to the treatment of various addictions and disorders such as stroke, autism, Alzheimer’s, schizophrenia, and ADHD.

Neurodegenerative Diseases
by Uday Kishore (ed.) - InTech
This book highlights the pathophysiological complexities of the mechanisms and factors that are likely to be involved in a range of neuroinflammatory and neurodegenerative diseases including Alzheimer's disease, other Dementia, Parkinson Diseases.
(7467 views)

Using Imaging to Identify Deceit: Scientific and Ethical Questions
by Emilio Bizzi, et al. - American Academy of Arts and Sciences
Can the new technique of functional magnetic resonance imaging (fMRI) detect deceit? This book examines the scientific support for using fMRI as well as the legal and ethical questions raised when machine-based means are employed to identify deceit.
(7313 views)

Understanding Alzheimer's Disease
by Inga Zerr (ed.) - InTech
Alzheimer's dementia affects 6 million Europeans with 10 percent of people over age 65 and more than a quarter over 85. Given the steady aging of European societies, dementia and cognitive decline have developed into a major health problem...
(7141 views)

Human Brain
- Wikipedia
The human brain has the same general structure as the brains of other mammals, but has a more developed cortex than any other. Despite being protected by the thick bones of the skull, the human brain is susceptible to damage and disease.
(4829 views)