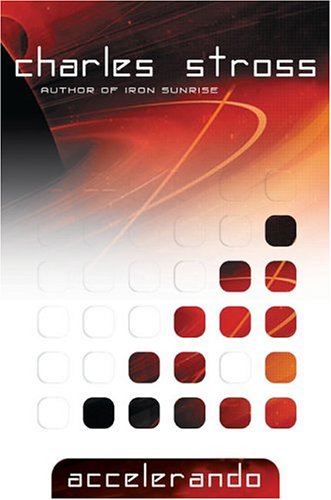 Description:
Expanding upon his award-winning short story cycle from the pages of Asimov's Science Fiction Magazine, Charles Stross-author of such revolutionary science fiction novels as Singularity Sky and Iron Sunrise-delivers the story fans have been anticipating with Accelerando, a novel destined to change the face of the genre. For three generations, the Macz family has struggled to cope with the rampant technological achievements that have rendered humans near obsolete. And mankind's end encroaches even closer when something starts to dismantle the nine planets of the solar system in an effort to annihilate all biological lifeforms.

Blindsight
by Peter Watts - Tor Books
In this stimulating hard SF novel, the author explores the nature of consciousness. The book combines riveting action with a fascinating alien environment. In the late 21st century something alien is discovered beyond the edge of the solar system.
(14025 views)

Passengers to Zeta Nine
by Peter Salisbury - Smashwords
The second of Peter Salisbury's Passenger novels. The electronic mind patterns and DNA records of Raife Harris and Doctor Nancy Zing have travelled amongst the stars for one hundred and twenty years. They will be the first humans to see Zeta Nine.
(4572 views)

The Radio Planet
by Ralph Milne Farley - Ace Books
When Myles Cabot, inventor of radio transmission of matter, returned to Venus he found himself alone on an unknown continent on that alien planet. To get back to his old headquarters and his loved ones presented some apparently impossible problems.
(2138 views)