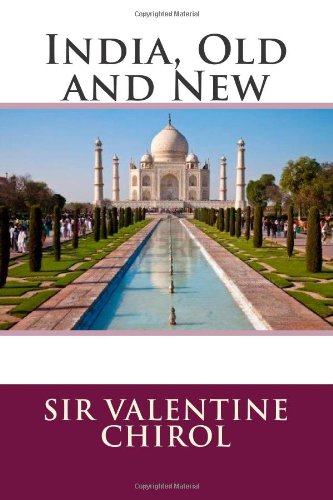 Description:
Critique of early 20th Century India according to the British diplomat, journalist and historian. From the contents: the clash of two civilisations, the enduring power of Hinduism, Mahomedan domination, British rule under the east India company, the mutiny and fifty years after, the first great wave of unrest, the Morley-Minto reforms, through the great war to the great Indian reform bill, the emergence of mr. Gandhi, side-lights on the elections, cross currents in southern India, the birth of an Indian parliament, economic factors, the inclined plane of Gandhiism, the Indian problem a world problem.

Modern India
by William Eleroy Curtis - Fleming H. Revell Co.
A series of letters written during the winter of 1903-04: The Eye of India; The City of Bombay; Servants, Hotels, and Cave Temples; The Empire of India; Two Hindu Weddings; The Religions of India; How India Is Governed; The Railways of India; etc.
(32405 views)

Orissa under the Bhauma Kings
by Pandit Binayak Misra - Vishwamitra Press
This monograph discusses the problems connected with the Bhauma family. For easy comprehension of the subject the book gives the texts and translations of almost all the published Bhauma records and a large number of inscriptions.
(16032 views)

History of India
by C. F. De La Fosse - Macmillan & Co.
The book deals with events which merit consideration in a general survey of the history of the country, and it remains, as far as it is possible to make it, a connected and consecutive account from the earliest times down to the present day.
(10321 views)

Kabir And The Kabir Panth
by G.H Westcott - Hesperides Press
Of all the great Hindu reformers, Kabir have had the greatest influence among the uneducated classes of Northern and Central India. He was described as the Indian Luther. The number of those who are under the influence of Kabir is great.
(16892 views)