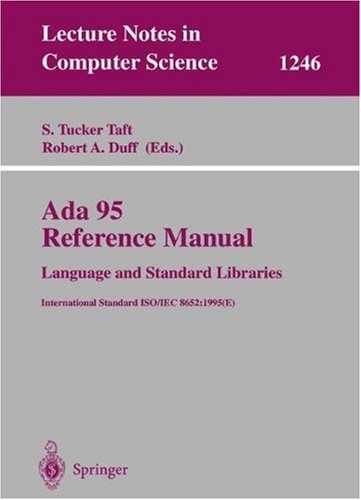 Description:
This Ada 95 Reference Manual is identical to the new standard ISO/IEC 8652:1995(E) for the Ada programming language. The revisions and extensions documented in this manual are built on broad participation from the Ada community and generous support by leading institutions. The resulting enhancements make Ada 95 an outstanding language. The flexibility, object orientation, and improved interfacing capabilities have been added to the reliable software engineering capabilities provided and proven for over a decade by the predecessor version Ada 83; furthermore, upward compatibility from Ada 83 to Ada 95 has been achieved.

Ada 95 Rationale - The Language - The Standard Libraries
by Laurent Guerby
This document describes the rationale for Ada 95, the revised International Standard. It introduces to Ada 95 and its features, gives a detailed account of the core language, covers the various annexes which address the predefined environment, etc.
(12789 views)

Ada 95: The Lovelace Tutorial
by David A. Wheeler - Springer
An introduction to Ada 95, a basic understanding of programming is assumed. Object-oriented facilities of Ada are covered in depth, and all of the essential features of Ada are covered thoroughly. Written for students and professional programmers.
(17610 views)

Ada Distilled
by Richard Riehle - AdaWorks
An introduction for experienced programmers new to Ada. The text highlights some key features of the language, with coded examples. It emphasizes syntax, control structures, subprogram rules, and how-to coding issues rather than design issues.
(14043 views)

Ada in Action, Second Edition
by Do-While Jones
This book does not teach the Ada programming language, you should be familiar with Ada syntax and semantics. The author shares the experiences he has had using Ada in engineering applications. This text will help you avoid some common pitfalls.
(17910 views)