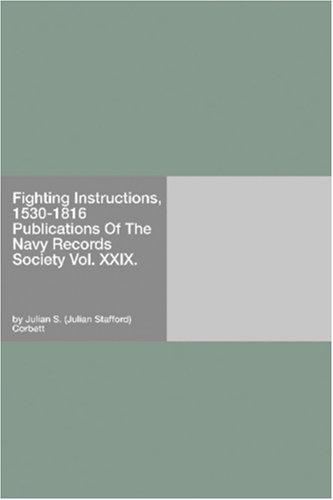 Description:
The discovery of a number of seventeenth century Instructions amongst the Earl of Dartmouth's papers, which he had generously placed at the disposal of the Society, seemed to encourage an attempt to make something like a complete collection. The result, such as it is, is now offered to the Society. It is by no means exhaustive. Some sets of Instructions seem to be lost beyond recall; but, on the other hand, a good deal of hitherto barren ground has been filled, and it is hoped that the collection may be of some assistance for a fresh study of the principles which underlie the development of naval tactics.

From the Mind to the Feet
by Lawrence A. Kuznar, Allison Astorino-Courtois, Sarah Canna - Air University Press
The essays in this volume examine the concept of intent in defense, security, and foreign-policy contexts. They provide operational and academic perspectives on measuring the intent of adversaries, including nation-states and nonstate actors.
(5993 views)

Decisive Battles of the World
by Edward Shepherd Creasy - The Colonial press
Fifteen decisive battles of the world from Marathon to Waterloo. A famous book which is not merely lodged in libraries, but is read and re-read. The stories the writer tells are as interesting in narrative as human struggle is itself interesting.
(14364 views)

The Final Campaign: Marines in the Victory on Okinawa
by Joseph H. Alexander - Diane Pub Co
With a magnitude that rivaled the Normandy invasion, the battle of Okinawa was the biggest and costliest operation of the Pacific War. For each of its 82 days of combat, the battle would claim 3,000 lives from the antagonists and the non-combatants.
(3354 views)