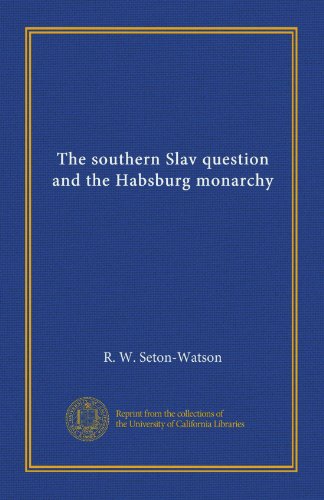 The Southern Slav Question and the Habsburg Monarchy
by R. W. Seton-Watson

Description:
No country in Europe presents such a variety of complicated problems for solution as the Austro-Hungarian Monarchy; and among these, none is more important and more pressing than the Southern Slav Question. In it are involved the future fortunes of the whole Croat and Serb race.

A History of Germany
by Bayard Taylor - Project Gutenberg
My aim has been to present a clear narrative, omitting no episode of importance, yet preserving a distinct line of connection from century to century. Besides referring to the best authorities, I have based my labors mainly upon three recent works.
(8638 views)

Age of Enlightenment
- Hourly History
From its beginnings as a loosely definable group of philosophical ideas to the culmination of its revolutionary effect on public life in Europe, the Age of Enlightenment is the defining intellectual and cultural movement of the modern world.
(2498 views)

Athens from Cleisthenes to Pericles
by C. W. Fornara, L. J. Samons - University of California Press
This book covers the history of the Alcmeonid family of Cleisthenes and Pericles, the nature and development of Athenian democracy, the growth of Athenian empire, and the burgeoning antagonism between Athens and Sparta.
(13192 views)

A Thousand Years of Russian History
by Sonia E. Howe - Williams and Norgate
The aim in this book is to convey general impressions of the various stages passed through by Russia in the course of her evolution, and to give sketches of the lives of those rulers who have stamped their era with the mark of their personality.
(8170 views)