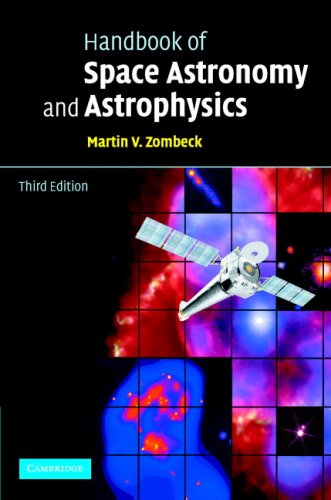 Handbook of Space Astronomy and Astrophysics
by Martin V. Zombeck

Description:
This handbook has become an essential reference for space astronomy and astrophysics. As well as a vast number of tables, graphs, diagrams and formulae it also contains information covering topics including atomic physics, nuclear physics, relativity, plasma physics, electromagnetism, mathematics, probability and statistics, and geophysics.

An Introduction to Astronomy
by Forest Ray Moulton - The MacMillan Company
It has been assumed that the reader has an interest in the wonderful universe which surrounds him, and that he has arrived at such a stage of intellectual development that he demands the reasons for whatever conclusions he is asked to accept.
(9734 views)

Astronomy of To-day
by Cecil Goodrich Julius Dolmage - Seeley and co.
The book gives an account of the science of Astronomy, as it was known in 1910, in a manner acceptable to the general reader. The author takes the theories of Astronomy out of those mathematical forms, and presents them in the ordinary language.
(10443 views)

General Astronomy
- Wikibooks
This book introduces the advanced secondary or beginning university student to the process that revealed the rich tapestry of the universe to humanity, presenting astronomy not only as a field of knowledge, but also as a human endeavor in science.
(10523 views)

A New Astronomy
by David Peck Todd - American Book Company
Contents: Language of Astronomy; Philosophy of the Celestial Sphere; Stars in their Courses; Earth as a Globe; Earth Turns on its Axis; Earth Revolves Round the Sun; Astronomy of Navigation; Observatory and its Instruments; The Moon; The Sun; etc.
(6552 views)