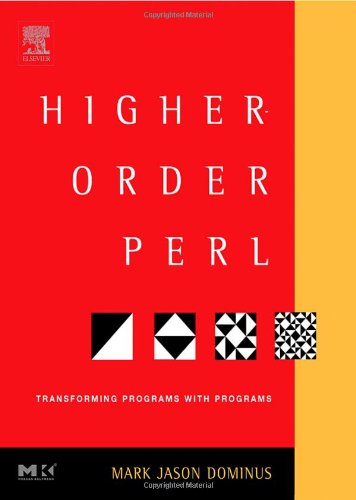 Description:
Perl incorporates many features that have their roots in other languages such as Lisp. These advanced features are not well understood and are rarely used by most Perl programmers, but they are very powerful. One of these techniques is writing functions that manufacture or modify other functions.

Unix and Perl Primer for Biologists
by Keith Bradnam, Ian Korf - Korf Lab
We have written a basic introductory course for biologists to learn the essential aspects of the Perl programming language. The course is very much aimed at people with no prior experience in either programming or Unix operating system.
(11736 views)

Perl 5 Tutorial
by Chan Bernard Ki Hong
This is a free Perl tutorial that is packed with everything you need to know to get started on Perl programming. Throughout the text there are many examples examples, illustrations and exercises in the form of concept consolidation questions.
(14750 views)

Modern Perl
by chromatic - Onyx Neon Press
Modern Perl is one way to describe how experienced and effective Perl 5 programmers work. They use language idioms. They take advantage of the CPAN. They're recognizably Perlish, and they show good craftsmanship and a full understanding of Perl.
(8703 views)

Perl 6 Programming
- Wikibooks
Perl 6 is the sixth edition of the Perl programming language, representing a major backwards-incompatible rewrite of the language. This online book is going to introduce the reader to the Perl 6 language and its many features.
(10663 views)