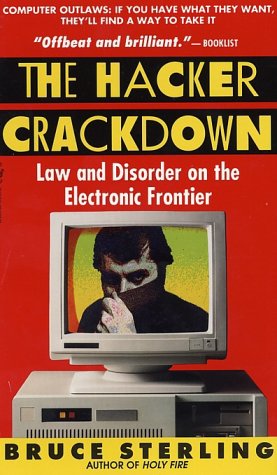 The Hacker Crackdown
by Bruce Sterling

Takers Economy: An Inquiry into Illegal File Sharing
by Christopher Stewart - Feedbooks
File sharing has become a widespread phenomenon. As much as having the possibility of exchanging information almost instantaneously can represent a blessing, it obviously opens the door to pursuits that enjoy a far less angelic reputation.
(5657 views)

Manifesto of the New Economy: Institutions and Business Models of the Digital Society
by Alexander Dolgin - Springer
The book describes the main directions for the development of the digital society. Learn what would replace search engines, and how social networks would evolve; what profit can be made of different forms of informational collaboration; and more.
(6046 views)

Cyberpragmatics: Internet-Mediated Communication in Context
by Francisco Yus - John Benjamins Publishing Company
Cyberpragmatics is an analysis of Internet-mediated communication from the perspective of cognitive pragmatics. It addresses a whole range of interactions that can be found on the Net: the web page, chat rooms, instant messaging, social networking...
(2831 views)

The Global Impact of Open Data
by Andrew Young, Stefaan G. Verhulst - O'Reilly Media
Open data has spurred economic innovation in recent years, but few people understand how open data works. The book presents detailed case studies of open data projects throughout the world, along with in-depth analysis of what works and what doesn't.
(3501 views)