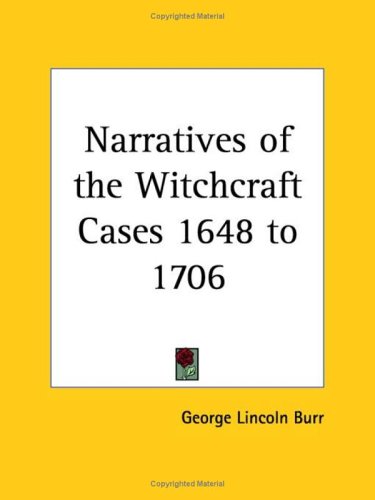 Narratives of the Witchcraft Cases, 1648-1706
by George Lincoln Burr

Description:
These narratives of witchcraft are no fairy tales. Weird as they seem to us, they were the most intense of realities to thousands of men and women in 17th century America. They were the bulletins of a war more actual, more cruel, more momentous, than any fray of flesh and blood. To those enlisted in this war in the age-long war of Heaven with Hell, they were instruction, encouragement and appeal.

The Presidents: A Reference History
by Henry F. Graff - Advameg, Inc.
This a standard resource for students and the general public alike: U.S. presidents from George Washington to George W. Bush are profiled in depth. This is the story of the national political leadership of the country during the nearly two centuries.
(16283 views)

Reassessing the Presidency : The Rise of the Executive State and the Decline of Freedom
by John V. Denson - Mises Institute
This remarkable book is the first full-scale revision of the official history of the U.S. executive state. Contributors examine the usual judgments of the historical profession to show the ugly side of supposed presidential greatness.
(13995 views)

Women of Influence
by Mark Betka, at al. - U. S. Department of State
Women of Influence: this collection chronicles how 21 notable American women broke new ground, some by championing equal rights for all and others by their accomplishments in fields such as government, literature, and even in war.
(11082 views)

Introductory American History
by Elbert J. Benton, Henry E. Bourne - Project Gutenberg
This is the introductory part of a course in American history embodying the plan of study recommended by the Committee of Eight of the American Historical Association. The plan calls for a continuous course running through grades six seven and eight.
(9523 views)