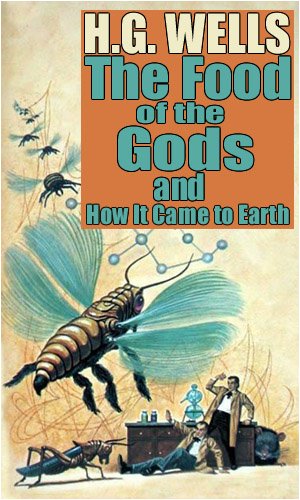 The Food of the Gods and How it Came to Earth
by H. G. Wells

Description:
An early examination of scientific ethics that helped define an important genre in science fiction. As a result of research into the growth curves of living matter, two scientists invent a seemingly miraculous substance called Herakleophorbia IV, nicknamed "The Food of the Gods." Its consumption causes accelerated uninterrupted growth in all forms of life. Its creators' lack of forethought and ineptitude results in terrifying consequences when the substance escapes the bounds of the experiment and is ingested by unintended creatures.

The Invisible Man
by H. G. Wells - Project Gutenberg
An obscure scientist had found a way to turn skin, flesh, blood and bones invisible--and tried the formula on himself. The Invisible Man had only two problems. He couldn't turn visible again. And he had gone quite murderously insane.
(12322 views)

The Stolen Bacillus and Other Incidents
by H. G. Wells - ManyBooks
This collection of short stories can be a very accessible introduction to the writings of H. G Wells. Themes: biological weapons, carnivorous plants, strange creatures in remote parts of the World, hallucinations and telepathic visions, etc.
(4240 views)

Babes in the Darkling Woods
by H. G. Wells - Secker & Warburg
Stella and Gemini come increasingly under the influence of a rather impressive psycho-therapeutist whose groundbreaking theories capture their imaginations. But when tragedy strikes they are soon to learn that intellectualism brings cold comfort.
(5166 views)

Star-Begotten: A Biological Fantasia
by H. G. Wells - Chatto & Windus
In his War of the Worlds, H. G. Wells imagined aliens from Mars descending to Earth. In Star Begotten, first published in 1937, the suspicion arises that the Martians may have returned -- this time using cosmic rays to alter human chromosomes.
(4482 views)