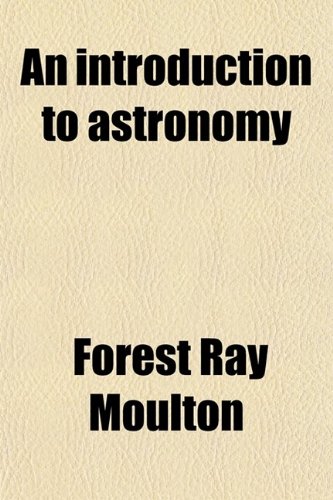 An Introduction to Astronomy
by Forest Ray Moulton

Description:
The aim has been to present the great subject of astronomy so that it can be easily comprehended even by a person who has not had extensive scientific training. It has been assumed that the reader has no intention of becoming an astronomer, but that he has an interest in the wonderful universe which surrounds him, and that he has arrived at such a stage of intellectual development that he demands the reasons for whatever conclusions he is asked to accept.

General Astronomy
by Harold Spencer Jones - Edward Arnold and Company
The book will serve to give the reader a sufficiently complete view of the present state of Astronomy. Mathematics has been almost entirely excluded in order that the volume may appeal to the amateur, no less than the student.
(11718 views)

A New Astronomy
by David Peck Todd - American Book Company
Contents: Language of Astronomy; Philosophy of the Celestial Sphere; Stars in their Courses; Earth as a Globe; Earth Turns on its Axis; Earth Revolves Round the Sun; Astronomy of Navigation; Observatory and its Instruments; The Moon; The Sun; etc.
(9612 views)

The Elements of Theoretical and Descriptive Astronomy
by Charles J. White - J. Wiley
I present the main principles of Astronomy in a form adapted to the elementary course of instruction which is commonly given at colleges and the higher grades of academies. I selected those topics which seemed to me to be the most important.
(7544 views)