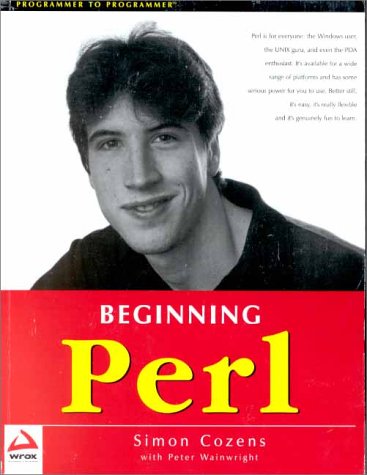 Description:
Perl is an immensely popular scripting language that combines the best features of C, key UNIX utilities and a powerful use of regular expressions. It has a wide range of uses beyond simple text processing and is commonly used for web programming - creating and parsing CGI forms, validating HTML syntax and hyperlinks - as well as e-mail and Usenet news filtering. Perl is increasingly the system administrator's scripting language of choice and is used for file and directory manipulation, database access and a whole range of daily system operator chores.

Beginning Perl
by Curtis 'Ovid' Poe - Wrox
This book introduces Perl to both new programmers and experienced ones. It presents step-by-step guidance in getting started, a host of try-it-out exercises, real-world examples, and everything necessary for a Perl novice to start with confidence.
(9892 views)

Picking Up Perl
by Bradley M. Kuhn - ebb.org
The material covered in this book is designed to prepare the reader to enter the world of Perl programming. This book covers the basic data and control structures of Perl, as well as the philosophies behind Perl programming.
(13603 views)

Essential Perl
by Nick Parlante - Stanford University
An introduction to the main features of the Perl language. It's intended for people who know some programming but need an introduction to Perl. Topics: scalar variables, strings, arrays, hash tables, file input and output, regular expressions, etc.
(2903 views)

Unix and Perl Primer for Biologists
by Keith Bradnam, Ian Korf - Korf Lab
We have written a basic introductory course for biologists to learn the essential aspects of the Perl programming language. The course is very much aimed at people with no prior experience in either programming or Unix operating system.
(11818 views)