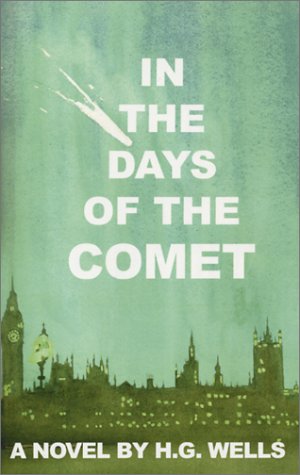 In the Days of the Comet
by H. G. Wells

Description:
A provocative novel by H.G. Wells. In the midst of a world war, the tail of a comet brushes the atmosphere of earth, causing everyone to lose consciousness for a few hours. When the world awakens, everyone has an expanded understanding of the meaning of things. The war is quickly ended; a new utopia is created; even crime is reduced to near zero.

The Truth Machine
by James L. Halperin
What would the world be like if scientists developed the perfect lie detector? Halperin argues that such an invention could lead humanity into an era of unequaled prosperity, one in which crime is virtually unknown and true democracy is possible.
(9357 views)

Mars Girl
by Jeff Garrity - Feedbooks
Mars Girl is fast-paced, insightful, inventive and very funny. Its vision of where the mutual dependence of politicians and media producers will end is both hilarious and a little frightening. Required reading for anyone who watches cable news.
(5650 views)

A Honeymoon in Space
by George Griffith - C. Arthur Pearson Ltd.
Lenox has made the greatest scientific discovery in the history: a flying ship with the power to break free of Earth's gravity. But before he uses it to expand humanity's understanding of the universe, he has some personal business to attend to.
(3308 views)

The Country of the Blind and Other Stories
by H. G. Wells - Thomas Nelson and Sons
H. G. Wells explores the relationship between the fantastical and everyday. Here horror meets humor: this is a marvelous literary universe showcasing the author's fascination with the wonders and perils of scientific progress.
(11772 views)