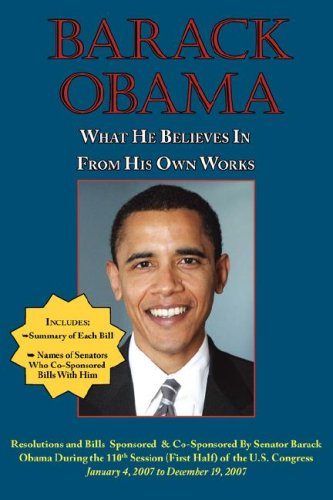 Description:
Barack Obama in his own words, a book of quotes from the Illinois Senator, allows those who aren't as familiar with his politics to learn quickly where he stands on abortion, religion, AIDS, his critics, foreign policy, Iraq, the War on Terror, unemployment, gay marriage, and a host of other important issues facing America and the world.

The National Interest and the Law of the Sea
by Scott G. Borgerson - Council on Foreign Relations Press
This report offers a fresh appraisal of the 1982 Convention on the Law of the Sea and pitfalls in light of the current geopolitical seascape and examines whether it is in U.S. strategic interests to now officially join the convention.
(9177 views)

Bagels, Barry Bonds, and Rotten Politicians
by Burton S. Blumert - Ludwig von Mises Institute
Burton Blumert is an entrepreneur who knows not only all that there is to know about precious metals but also about politics and economics. He offers his wide-ranging insights in this funny, charming, and also learned collection of essays.
(15404 views)

Barack Obama's Post-American Foreign Policy
by Robert Singh - Bloomsbury Academic
Singh argues that Obama's approach of 'strategic engagement' was appropriate for a new era of constrained internationalism, but it has yielded modest results. Obama's search for the pragmatic middle has cost him political support at home and abroad.
(3165 views)