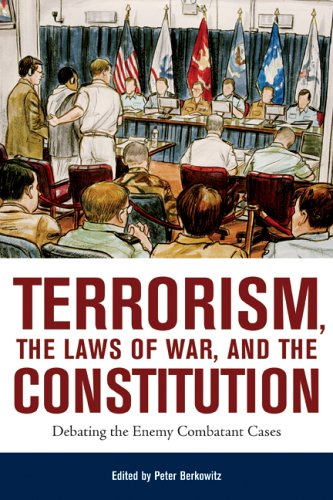 Terrorism, the Laws of War, and the Constitution
by John Yoo

Description:
This volume examines three enemy combatant cases that represent the leading edge of U.S. efforts to devise legal rules, consistent with American constitutional principles, for waging the global war on terror. The distinguished contributors analyze the crucial questions these cases raise about the balance between national security and civil liberties in wartime and call for a reexamination of the complex connections between the Constitution and international law.

A Practical Guide to Winning the War on Terrorism
by Adam Garfinkle - Hoover Institution Press
The book undermines the very notion that terrorism is a legitimate method of political struggle and for changing the conditions that lead people to embrace it. The authors examine the diplomatic, educational, and religious aspects of the problem.
(6865 views)

Immigration Policy and the Terrorist Threat in Canada and United States
by James Bissett, at al. - The Fraser Institute
The authors identify serious weaknesses in the immigration, asylum, and border regimes from Canadian and American perspectives. The entry of a number of potentially dangerous individuals should warrant major attention and policy review.
(13360 views)

Skating on Stilts: Why We Aren't Stopping Tomorrow's Terrorism
by Stewart Baker - Hoover Institution Press
Baker examines the technologies we love -- jet travel, computer networks, and biotech -- and finds that they are likely to empower new forms of terrorism unless we change our current course and overcome resistance to change from privacy advocates.
(6701 views)

Terrorism Since 9/11: The American Cases
by John E. Mueller (ed.) - The Ohio State University
This book includes a discussion, each organized in a similar manner, of the cases that have come to light of Islamist extremist terrorism since 9/11, whether based in the United States or abroad, in which the United States itself has been targeted.
(5447 views)