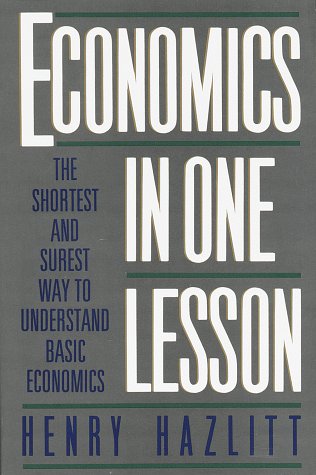 Economics in One Lesson
by Henry Hazlitt

Description:
This book is an analysis of economic fallacies that are at last so prevalent that they have almost become a new orthodoxy. The one thing that has prevented this has been their own self-contradictions, which have scattered those who accept the same premises into a hundred different "schools," for the simple reason that it is impossible in matters touching practical life to be consistently wrong.

Capital and Production
by Richard von Strigl - Mises Institute
Strigl's important work is translated to English. The book links Eugen von Böhm-Bawerk's production theory and Mises's business cycle theory, and gives a pathbreaking account of the role of consumers' goods within the structure of production.
(12705 views)

Cook-Book Of Mathematics
by Viatcheslav Vinogradov - CERGE-EI
Simple recipes for solving problems students might face in their studies of economics. The main goal was to refresh students' knowledge of mathematics rather than teach them math from scratch, BA level mathematics is required.
(21726 views)

The Economy as a Complex Spatial System
- Springer Open
Visualizing the EU as a complex and multi-layered network, this collected volume is organized in three parts, each of them dealing with a different level of analysis: the macro-level, the meso-level, and the micro-level ...
(4842 views)

Mathematical Analysis for Economists
by R. G. D. Allen - Macmillan And Company
The mathematical methods described are used in the elucidation of problems of economic theory. Illustrative examples are added and it is hoped that the reader will become familiar with the mathematical tools and applications to concrete problems.
(4670 views)