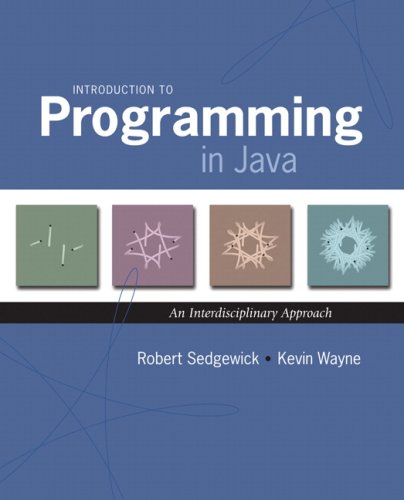 Introduction to Programming in Java: An Interdisciplinary Approach
by Robert Sedgewick, Kevin Wayne

Description:
This book is an interdisciplinary approach to the traditional CS1 curriculum. It teaches all of the classic elements of programming, using an objects-in-the-middle approach that emphasizes data abstraction. The book is organized around four areas of computer science: programming, machine architecture, theory, and systems.

Java for Python Programmers
by Brad Miller - interactivepython.org
This e-book is an ongoing project to help Computer Science students who have had one or two semesters of Python learn the Java programming language. If you are not a part of that audience you may still find this a useful way to learn about Java.
(9345 views)

Brewing Java: A Tutorial
by Elliotte Rusty Harold - Cafe au Lait
This is a tutorial introduction to Java that just covers what you need to know to start programming command line applications in Java. This is an introduction to the basic syntax of the language. Part 3 covers the basics of writing applets in Java.
(10319 views)

How to Think Like a Computer Scientist (Java Version)
by Allen B. Downey - Green Tea Press
This book is less about Java, and it is only partly about programming. It is about a way of thinking. Computer scientists have an approach to problem-solving, and a way of crafting solutions, that is unique, versatile and powerful.
(19548 views)

Interactive Programming In Java
by Lynn Andrea Stein - Morgan Kaufmann Publishers
Introduction to computer programming intended for students in standard CS1 courses with no prior programming experience. It is the first textbook to rethink the traditional curriculum in light of the current interaction-based computer revolution.
(13441 views)