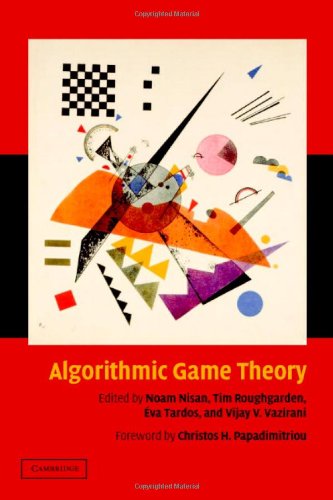 Description:
The subject matter of Algorithmic Game Theory covers many of the hottest area of useful new game theory research, introducing deep new problems, techniques, and perspectives that demand the attention of economists as well as computer scientists. The all-star list of author-contributors makes this book the best place for newcomers to begin their studies.

Agent-Based Evolutionary Game Dynamics
by L.R. Izquierdo, S.S. Izquierdo, W.H. Sandholm - Pressbooks
This book is a guide to implement simple agent-based evolutionary models using NetLogo. All the models we implement are agent-based, i.e. individual agents and their interactions are explicitly represented in the models ...
(2552 views)

Game Theory
by Giacomo Bonanno - University of California, Davis
This is a textbook on non-cooperative Game Theory with 165 solved exercises. It is intended to be rigorous and it includes several proofs. It is appropriate for an undergraduate class in game theory and also for a first-year graduate-level class.
(7071 views)

More Games of No Chance
by Richard J. Nowakowski - Cambridge University Press
This book is a state-of-the-art look at combinatorial games, that is, games not involving chance or hidden information. The book contains articles by some of the foremost researchers and pioneers of combinatorial game theory.
(10500 views)