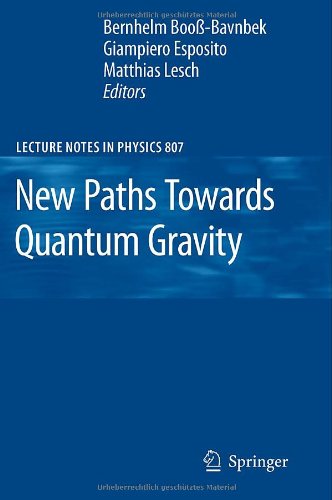 Description:
The division of the book in two parts reflects the duality between the physical vision and the mathematical construction. The former is represented by tutorial reviews on non-commutative geometry, on space-time discretization and renormalization and on gauge field path integrals. The latter one by lectures on cohomology, on stochastic geometry and on mathematical tools for the effective action in quantum gravity.

An Introduction to Quantum Gravity
by Bryce S. DeWitt, Giampiero Esposito - arXiv
The reader is introduced to the functional integral quantization of gravitation and Yang-Mills theory. The text is useful for all Ph.D. students who face the task of learning some basic concepts in quantum gravity in a relatively short time.
(8914 views)

Introduction to Modern Canonical Quantum General Relativity
by Thomas Thiemann - arXiv
This is an introduction to canonical quantum general relativity, an attempt to define a mathematically rigorous, non-perturbative, background independent theory of Lorentzian quantum gravity in four spacetime dimensions in the continuum.
(10996 views)