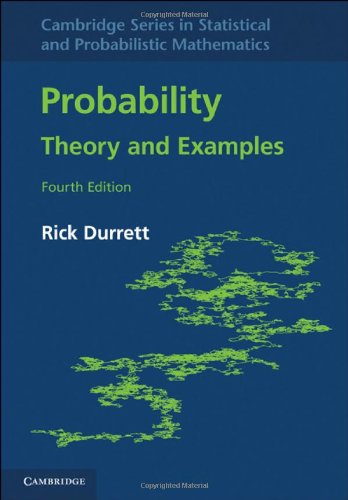 Description:
This book is an introduction to probability theory covering laws of large numbers, central limit theorems, random walks, martingales, Markov chains, ergodic theorems, and Brownian motion. It is a comprehensive treatment concentrating on the results that are the most useful for applications. Its philosophy is that the best way to learn probability is to see it in action.

A Philosophical Essay on Probabilities
by Pierre Simon Laplace - Chapman & Hall
Classic book on probability theory. It demonstrates, without the use of higher mathematics, the application of probability to games of chance, physics, reliability of witnesses, astronomy, insurance, democratic government, and many other areas.
(14536 views)

Exposition of the Theory of Chances and Probabilities
by A. A. Cournot - arXiv.org
I aim to make accessible the rules of the calculus of probability to those, unacquainted with the higher chapters of mathematics. The reading of my book will not require any other knowledge except elementary algebra, or even algebraic notation.
(1359 views)

A History Of The Mathematical Theory Of Probability
by I. Todhunter - Kessinger Publishing, LLC
History of the probability theory from the time of Pascal to that of Laplace (1865). Todhunter gave a close account of the difficulties involved and the solutions offered by each investigator. His studies were thorough and fully documented.
(15064 views)