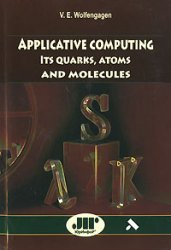 Description:
This work covers the advanced topics in main ideas of computing in general. The material is approved in practice of NRNU MEPhI, MIPT and several other educational centers of the Russian Federation. The book is suitable both for advanced learners and beginners in Computing and Information Technologies as well as in Discrete Mathematics.

Languages and Machines
by C. D. H. Cooper - Macquarie University
This is a text on discrete mathematics. It includes chapters on logic, set theory and strings and languages. There are some chapters on finite-state machines, some chapters on Turing machines and computability, and a couple of chapters on codes.
(18892 views)

Logic and Proof
by Lawrence C Paulson - University of Cambridge
These lecture notes give a brief introduction to logic, with including the resolution method of theorem-proving and its relation to the programming language Prolog. Formal logic is used for specifying and verifying computer systems.
(12588 views)

Bayesian Computational Methods
by Christian P. Robert - arXiv
We will first present the most standard computational challenges met in Bayesian Statistics, focusing primarily on mixture estimation and on model choice issues, and then relate these problems with computational solutions.
(7750 views)