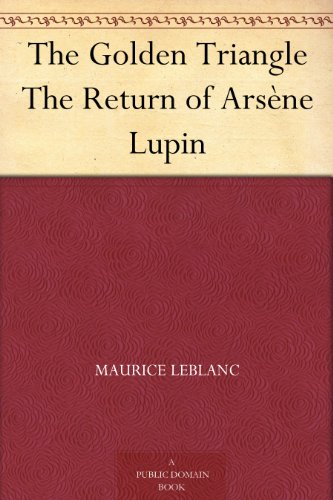 The Golden Triangle: The Return of Arsene Lupin
by Maurice LeBlanc

Description:
In this dramatic story M. Leblanc is chiefly concerned with the mystery that surrounds the 'Little Mother Coralie,' a volunteer nurse working in a military hospital in Paris, and Captain Belval, one of her patients who has lost a leg in the war.

The Woman of Mystery
by Maurice LeBlanc - The Macaulay Co
The author paints a wonderful tale of WWI in France, twined together with the mystery surrounding the murder of main character Paul's father. Maurice LeBlanc became famous for the creation of Arsene Lupin, a gentleman thief and master of disguise.
(5084 views)

813
by Maurice LeBlanc - ManyBooks
When one of Arsene Lupin' victims is found dead in a way that implicates the wily criminal, he insists on heading the police search for the real murderer. The mystery involves finding a clock on which the number 813 has significance.
(4741 views)

Arsene Lupin
by Maurice LeBlanc
Leblanc's creation, gentleman thief Arsene Lupin, is everything you would expect from a French aristocrat -- witty, charming, brilliant, sly ... and possibly the greatest thief in the world. This is the first entry in the series about Arsene Lupin.
(2071 views)

The Crystal Stopper
by Maurice LeBlanc - Le Journal
Arsene Lupin may have finally met his match in Deputy Daubrecq, a cunning detective who foils Lupin's most cunning robberies, thefts, and even a kidnapping. Can the world's greatest thief get his act together, and recover his lost honor?
(1982 views)