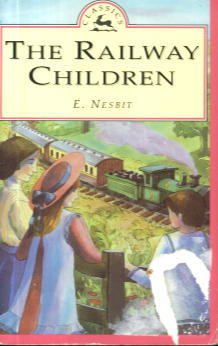 The Railway Children
by E. Nesbit

Description:
When father is suddenly taken away, mother and the three children must leave their fancy London life to live in a simple country cottage near a train station. The children and their bottomless good nature, together with some new friends, work to rescue father and help others along the way.

Alice's Adventures in Wonderland
by Lewis Carroll - Macmillan and Co.
This is possibly the best known children's novel, a fantastical, whimsical tale which grabs reader's imagination and bursts with visual possibility. The story plays with logic, which has made it of lasting popularity with children as well as adults.
(13857 views)

Tom Brown's School Days
by Thomas Hughes - Grosset & Dunlap
Lively and mischievous, idle and brave, Tom Brown is both the typical boy of his time and the perennial hero. The book describes Tom's time at Rugby School from his first football match, through his troubled adolescence when he is savagely bullied...
(6027 views)

The Swiss Family Robinson
by Jean Rudolph Wyss - Rand McNally & Company
Swept off course by a storm, a Swiss pastor, his wife, and four sons are shipwrecked on an uncharted tropical island. Thus begins the classic story of survival and adventure that has fired the imaginations of readers since it first appeared in 1812.
(9193 views)

Twas the Night before Christmas
by Clement Clarke Moore - Houghton Mifflin Company
'Twas the Night Before Christmas has been in print for more than eighty years, and this version of the beloved poem with classic illustrations has become as much a part of Christmas as Santa Claus. A Christmas present for kids.
(7387 views)