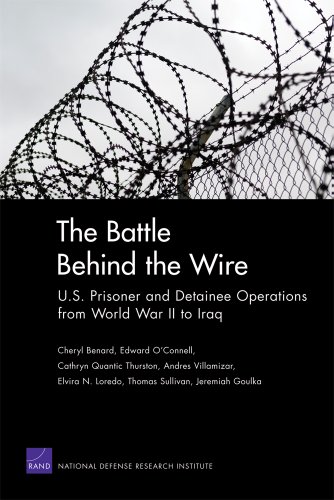 The Battle Behind the Wire: U.S. Prisoner and Detainee Operations from World War II to Iraq
by Cheryl Benard, et al.

Description:
Determining how to gain knowledge from, hold, question, influence, and release captured adversaries can be an important component of military strategy and doctrine, both during the conflict and in reconstruction afterward. This monograph finds parallels in U.S. prisoner and detainee operations in World War II, Korea, Vietnam, and Iraq: underestimation of the number to be held, hasty scrambling for resources to meet operational needs, and inadequate doctrine and policy.

The Victory At Sea
by William Sowden Sims - John Murray
An authoritative, summarized accounting with illustrations and maps of U.S. naval operations during the First World War. It is a 'must' for any naval historian, research scholar, coalition military tactician, including naval learning centers.
(5626 views)

Strategy in the Missile Age
by Bernard Brodie - RAND Corporation
The book was written during the dawn of the nuclear age, when the advent of intercontinental ballistic missiles necessitated a massive rethinking of military strategy and power. Originally published in 1959, it retains ample relevance today.
(6843 views)

Selection and Use of Strategic Air Bases
by Albert Wohlstetter, et al. - RAND Corporation
An examination of the critical factors in strategic-base selection and an application of this analysis. The factors considered are the distances from bases to targets, to favorable entry points into enemy defenses, and to the source of base supply.
(5570 views)

Collective Defense or Strategic Independence
by Ted Galen Carpenter (ed.) - Cato Institute
The doctrine of collective defense has governed U.S. foreign policy for more than four decades and has enjoyed public consensus. But now prominent figures on both the left and the right are advocating a new look at America's global commitments.
(2096 views)